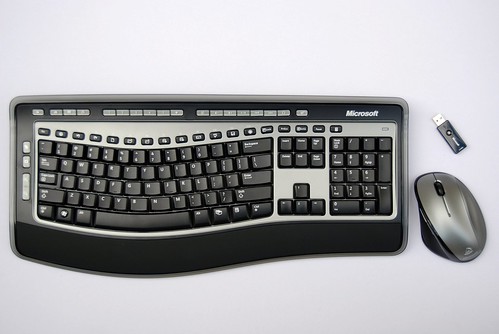 Under normal circumstances, it would be silly to give a new product with improved features and a strikingly new design the same product name as the previous version, but we’ve come to learn Microsoft’s marketing department is hardly normal. In short, consider this as the Wireless Laser Desktop 6500 if you may, Microsoft took an already awesome wireless keyboard and wireless laser mouse set and made it even better.

As a side note, it’s somewhat unfortunate that I had go through two sets of the Wireless Laser Desktop 6000 v2 to get to play with this – both of which suffered hardware malfunctions after 12 months of pretty intensive use (FPS gaming) – but I guess this is a good opportunity brag about the three-year warranty and no-questions-asked support reps at Microsoft. 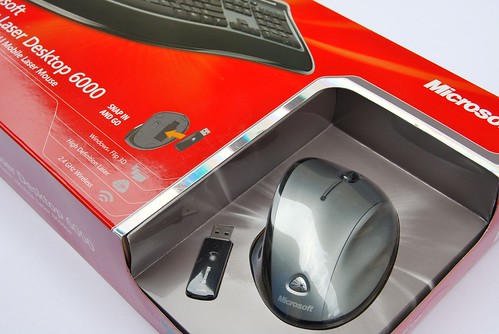 With all the attention that’s placed on product packaging these days, Microsoft Hardware has really shined with their widespread adoption of clamshell packaging. Compared to the previous version where you could just fit a hand on the window, even ogre hands can get in there now. Sure you can read all the reviews about comfort and fit but nothing beats trying it out for yourself. 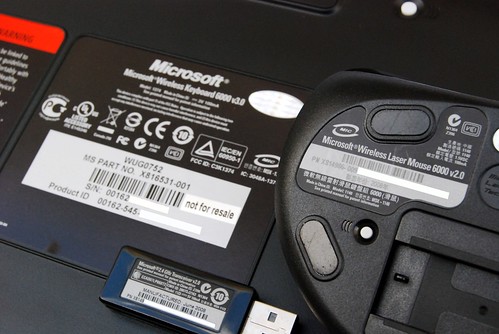 As the name suggests, the keyboard and mouse both use wireless 2.4GHz for connectivity. Having just played with the Microsoft Wireless Entertainment Desktop 7000 for a couple days which uses Bluetooth for connectivity, I can now safely say traditional wireless beats Bluetooth for ease-of-configuration, range and performance. (And I say that having experienced countless unnecessary deaths in Team Fortress 2.)

Whereas a Bluetooth keyboard and mouse took a good few minutes to connect and configure with software, wireless is as simple as pretty a button on the transceiver and a button on the mouse. Bluetooth range lasted me no more than 2 meters for any practical use, where as wireless is at least double that. Speaking as an avid online FPS gamer, Bluetooth had a small but impacting delay and jitter in online games whereas wireless is as instant as wired and smooth as butter.

Admittedly I was skeptical to find that Microsoft replaced the older transceiver base which had a long cable that could sit away from your PC case with a self-contained USB dongle, mostly because I don’t think the thick metal box otherwise known as the computer case is the best thing to stick a transceiver behind, but that’s not the case. Having used both variants, I notice no performance degradation with the new dongle. 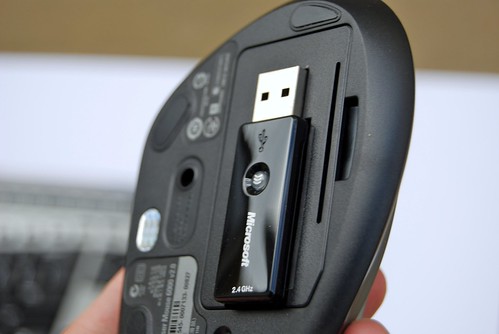 One reason they’ve switched to these dongles is so that you can place the dongle underneath the mouse and take it with you. I’m not sure how other users of that PC might feel when they discover that the mouse is missing and they can’t use the keyboard either, but it’s a neat idea to give laptop users the choice. 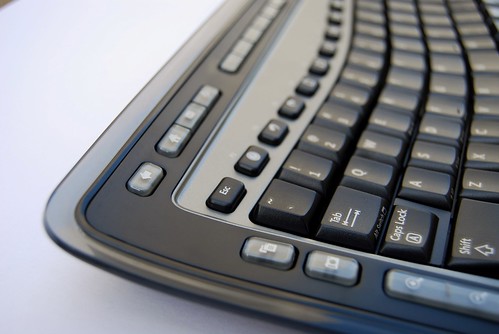 Another highlight of this keyboard is the “Windows Vista Aero-inspired” border which wraps around the whole device. To be perfectly honest, it’s a nice touch but nothing to brag about since it’s pretty much a thin layer of colored plastic. 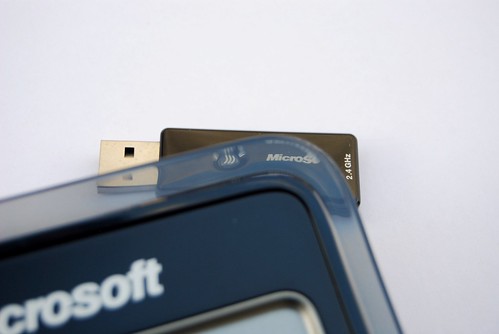 Personally I imagined it to be more like frosted glass but as you can see it’s pretty much see-through. Whoever invents a material where you can control the effect like pixel shaders will be very rich. 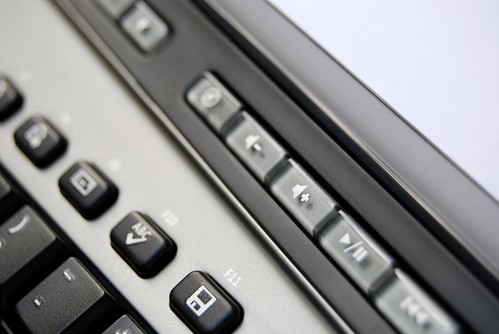 The multimedia keys have also got a visual makeover with transparent buttons. Compared to the previous v2’s layout, v3 features more streamlined buttons which is better organized and less intrusive. 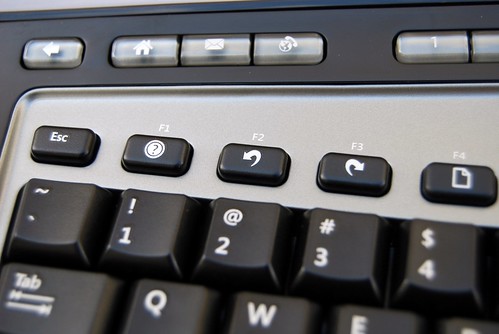 The function keys have also been redesigned with smaller individual buttons that are equally spaced between each other. This is a change I don’t welcome where it seems like they’ve change it for the sake of change. I say this because in the previous version, and on most keyboards, function keys are grouped in sets of fours (F1-F4). This is useful because I’ve grown use to the habit of finding buttons by which set they are in and where they are in the set, for example F5 is the first of the second set, F12 is the last of the last set. I’ve been taking a few guesses at where they are with moderate accuracy, but nothing beats knowing what button it is before pressing it. 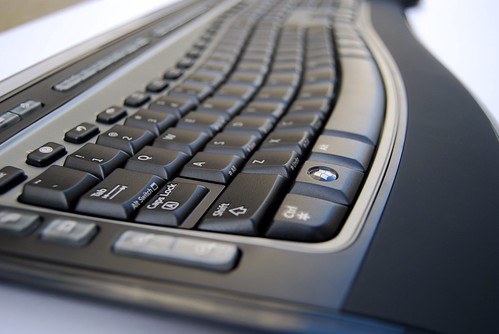 The rest of the keyboard remains pretty much identical the previous version. The keys are fairly soft and quiet whilst at the same time keeping the “desktop keyboard” tactile feel. It’s also good knowing the keyboard is ergonomically approved whilst it is still aesthetically pleasing (no ugly divide). Like the previous version, the rubbery palm rest remains and is in my opinion adds a lot to the comfort. 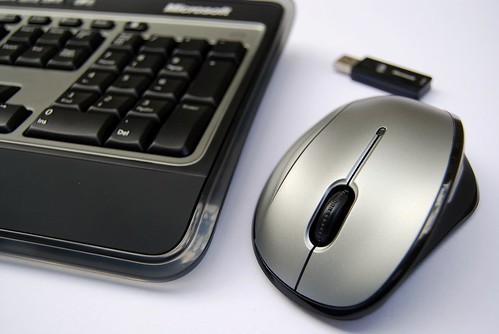 The mouse on the other hand is radically different from the previous version. At first sight it might seem like it was designed by a person who had just discovered curves, but you’d be surprised just how easily your hands rest and grip on it.

Besides the normal things you expect out of a mouse like clicking and moving which it does well, I can’t help myself but comment on the scroll wheel and how Microsoft continues to baffle me why they’re making it harder and harder to use. The scroll wheel is now thinner than a female celebrity on a mission and the middle-click is becoming almost a balancing puzzle in itself – balance a little too far left or right activates the horizontal scroll instead. Bring back the old tactile broad scrolls with an obvious middle-click please. 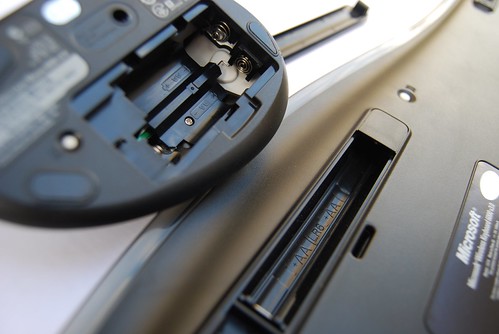 Finally some quick notes about the battery life. Both the keyboard and mouse use two AA batteries (included). Obviously it’s difficult to give a firm evaluation of the battery life without prolonged use but from experiences using the previous version, the mouse lasts around 2-3 months with very intensive use and the keyboard around 4-5 months with pretty intensive use too. Battery indicators on both will let you know when to prepare a fresh set of batteries before it passes away. Update: Forgot to mention the software, and you’ll see why. The keyboard and mouse uses the common Microsoft IntelliType and IntelliPoint drivers respectively. New driver updates come out as often as Al Qaeda videos which is acceptable since it does what it needs to do fairly well. Besides the obvious it allows you to customize all of the non-standard keys on the keyboard and every button on the mouse as well as check the health of the battery (which always appears green).

At a retail of US$99.95 (and US$78 on Amazon), this is not a desktop set you’d buy for your average beige box. If you don’t like wires but is concerned about performance and range, then I’d recommend you avoid Bluetooth for the time being. The Wireless Laser Desktop 6000 v3 is a stylish and functional desktop set with plenty of useful features. If you already have a v2 it’s probably not worth upgrading to but if you’re in the market for a new work or gaming desktop set without the premium tax then definitely have a look at this.