I would say I’m quite good with maps and for that reason I’ve never needed a GPS device. Having said that, I’m also deeply intrigued by the technology. Today I received a HP iPAQ 312 Travel Companion to review. 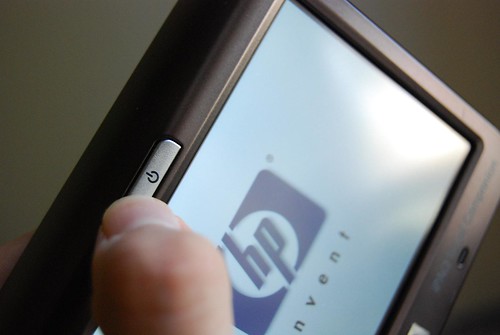 Prior to this, I had no idea Hewlett Packard had made a GPS product. This is in fact their second. Still, I was a little worried they might be stepping into unfamiliar territory and the quality of this product would reflect their lack of experience in the field. Having played with it now, it has overcome all my fears and I believe there’s no reason why anyone looking for a GPS device should exclude this from their list. Here’s my what I found. 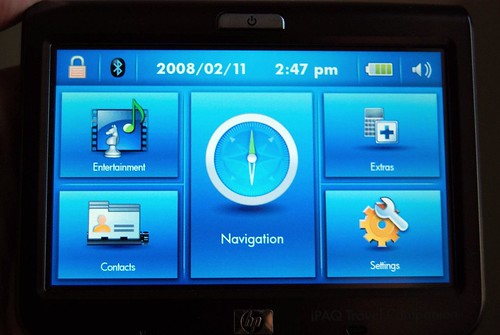 At the first impression, you’ll come to admire how beautiful the user interface is on this gorgeous high-resolution (800×480) resolution screen. Each icon is finely detailed and there are plenty of them. The cool blue theme is consistent yet refreshing. 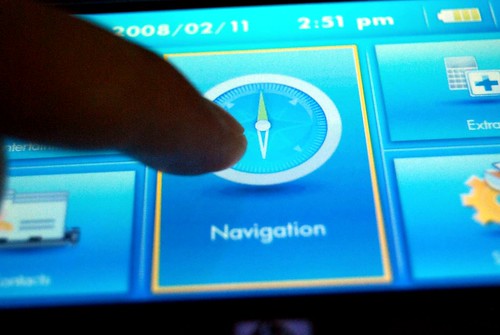 The interface is also well optimized for touch, the only method of input. Unlike the capacitative multi-touch craze, this device uses the traditional resistive touch technology which means any object forced onto the display will register. A stylus is included and sits in a slot on top of the device, but because the buttons are so large anyway there’s little if any reason to use them. 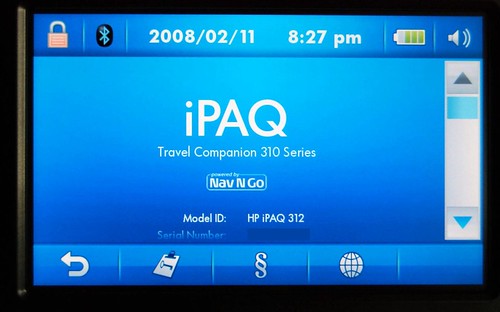 You might be led to believe this device is running a custom operating system – perhaps Symbian or Java, but in fact like most of the other HP iPAQ devices it runs Windows, Windows CE 5.0 to be exact. And no, it hasn’t crashed. This is a great example of a Windows device that doesn’t scream Windows. 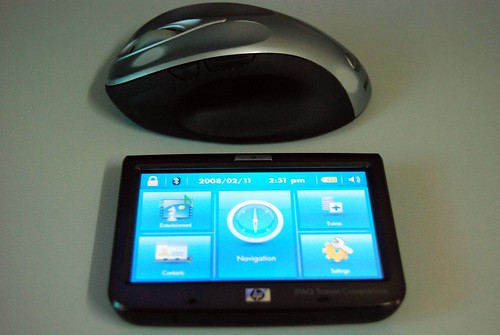 By looking at some of the promotional HP images of this device, you might be easily convinced that this is a large device, but in fact it’s very compact. In comparison, it’s smaller than my mouse. There’s minimal bevel around the generous 4.3-inch screen. Whilst the screen size doesn’t hinder readability, it would have been nice if it was just a little bigger to space out the smaller buttons a little more. 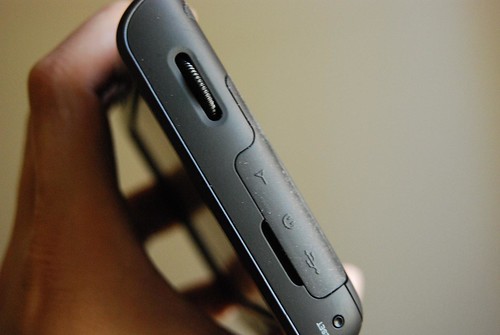 On the right side is a rotatable and clickable scroll wheel – similar feel to a mouse scroll wheel, this serves as an easy way to zoom in and out of maps as well as changing volume and screen brightness. There is also a rubber flap for antenna, headphone and USB connectors. And at the very bottom, a small reset button. 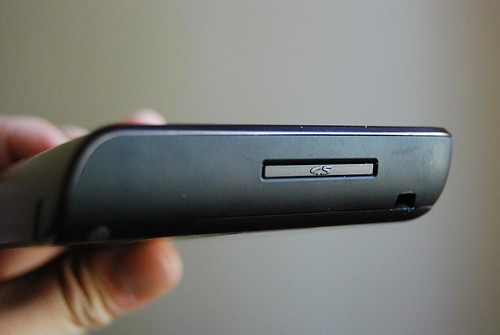 On the left side is the slot for the Secure Digital card. No SD card is required to operate the device, however you can access the media stored on it. 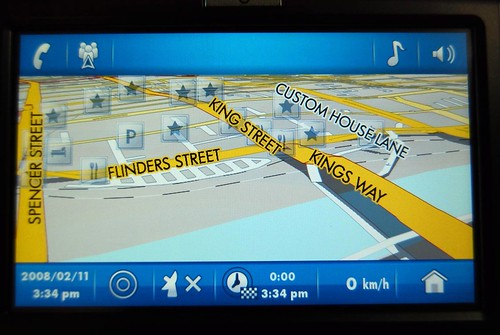 A big selling feature of this device is the 3D map capability, which is a combination of the software and third-party mapping data. Unfortunately the digital map data in Australia is very primitive and does not show buildings and other structures as it would in US or Europe, but you can still see some of the 3D effects on bridges as above. 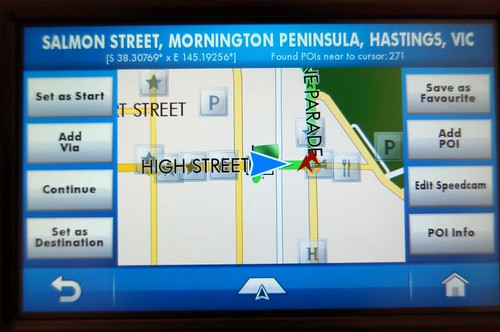 Personally, I find myself switching back to 2D view again and again because 3D view is quite processing incentive, and doesn’t give the fluid experience of panning around a map very well. 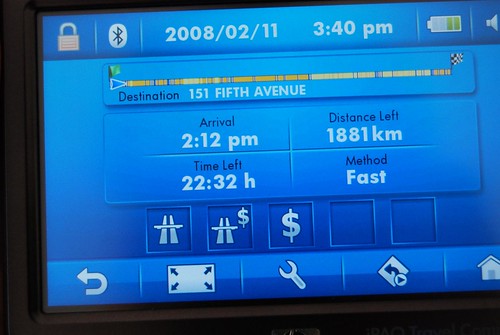 This device had no problems routing all the routes I threw at it, including those in outer suburbia. All the returned routes were exactly the ones I know are the best from personal experience. Routing journeys of around 40 kilometers (25 miles) took less than 4 seconds. Route recalculations such as those from a wrong turn were under 2 seconds. In the route details screen, it was smart enough to show me how many kilometers were traveled on highways and if there were any tolled highways or roads. 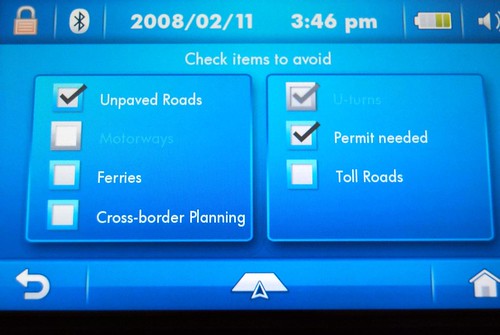 However if you’re a freeloader like myself, you can easily set up to avoid toll roads as well as many others unfavorable road features. 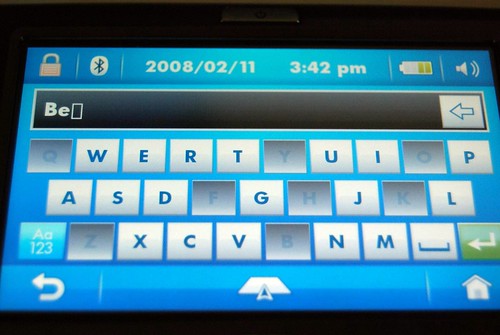 The turning point of this device for me from just a digital map to a useful driving tool is this feature of address filtering. I’m not too familiar with GPS devices so I’m not sure how many of them offer similar functionality like this, but what it does is it prevents you from typing addresses which do not exist such as road names and suburb names.

For example, after you input a suburb, it will only allow you to type the roads that exist in that suburb. This filtering continues to cut down letter-by-letter. When appropriate, it will switch views to present you with a list of options you can select. 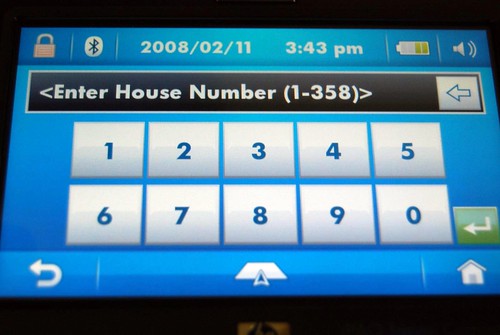 The same applies to street numbers too.

The text-to-speech synthesizer is equally impressive as well. Whilst it doesn’t announce street names Impressively, it even announces street names through the text-to-speech engine available on some languages including US English but not Australian English, a feature usually available on devices $200 more expensive than this. It provides very clear and natural directions via the loudspeaker on the back. 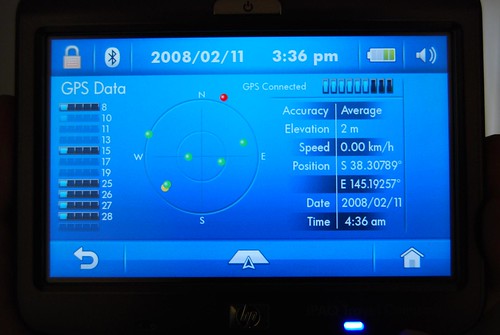 Having walked around on foot with the device, the GPS accuracy has an error margin of around 10 meters which is not that much of a deal in a car. However after turning a corner and changing orientation, it is able to correct itself pretty much instantly. Surprisingly with the internal antenna, I was even able to receive some GPS signal on and off under a tin metal roof. 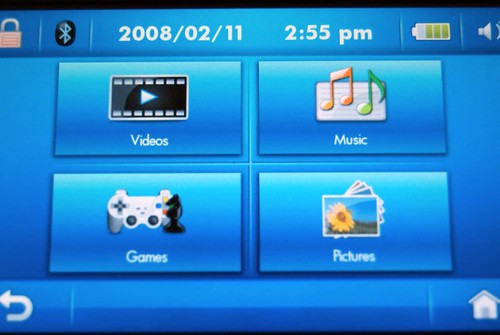 In addition to the navigation features, this device also includes a range of basic entertainment functions like viewing pictures, videos, music and a range of arcade games. I applaud for HP for trying to extend the device with useful multimedia features, but it really falls short.

The Achilles heel of this device is that it is severely underpowered. For example, when trying to play a standard-definition Windows Media Movie video, it was downright unwatchable almost like a picture slideshow. On top of that, when the announcer informed me the GPS signal had been lost, the video actually froze so the speech synthesizer could do its job. Either the multimedia software is severely unoptimized or the processor is not powerful enough, I hope HP takes this problem seriously for the next version. It could have been a serious PMP-contender, but the software and hardware is just not up to scratch. 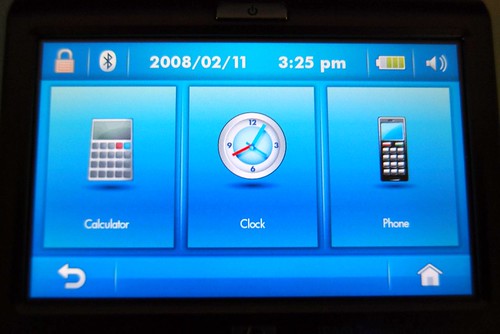 Since I don’t have a Bluetooth phone, I wasn’t able to check out the Bluetooth connectivity features but at the least it offers hands-free answering capability to receive and dial calls. Most points of interest on the map also has a telephone number which makes it even easier to book reservations at your destinations without ever touching your phone. 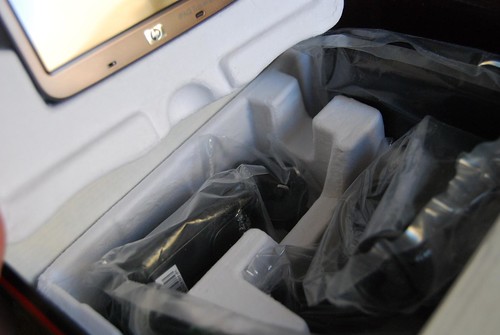 At a recommended retail price of US$450, this GPS device does slip a little into the pricey side. Having briefly compared it with some competing products, I think the user interface alone might be worth its difference. For its second try, HP has built a very solid device with a great piece of software that really shows they’re committed to the GPS experience as much as any of the other competitors. Can’t wait to see where they’ll go next.

Check out my Flickr gallery for more pictures of this device.

Update: I decided to try out the HP Content Manager available from the iPAQ website. Much to my surprise, there’s an abundance of updates already available for my device which I believe to be fairly recent. From here, I can download and install base software updates, map updates, POI updates, menu languages and voice languages. At the time of writing, there are 560MB worth of updates I’m downloading and installing. I’m going to see if this has any impact on performance.

Update 2: After applying all the software updates, I can’t find any visible changes to the operating system nor the applications. Navigating around the interface seems a little bit snappier, but navigating around maps is still not as smooth as I’d like it to be.