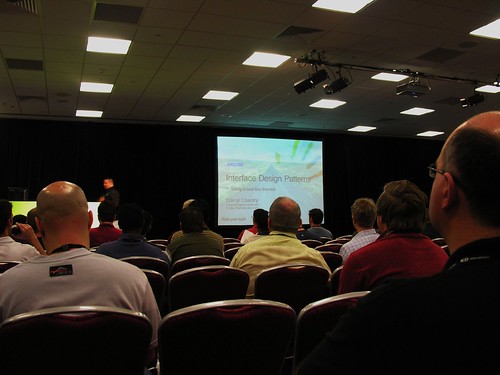 This morning at TechEd Australia 2007, I attended the “Interface Design Patterns” session by Darryl Chantry, an architect on the Architecture Strategy Team at Microsoft (Australia). A session mostly directed to developed on how they should start thinking about designing application for the user, instead of themselves. 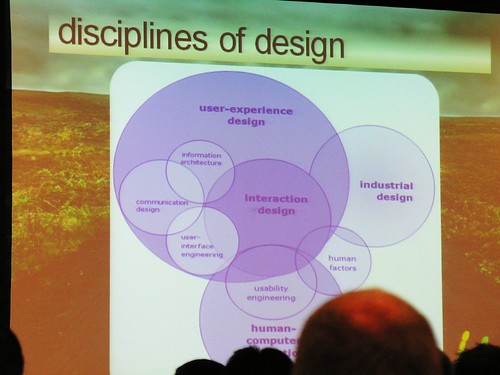 The many and overlapping disciplines of design. Darryl places operating systems under human-computer interaction. 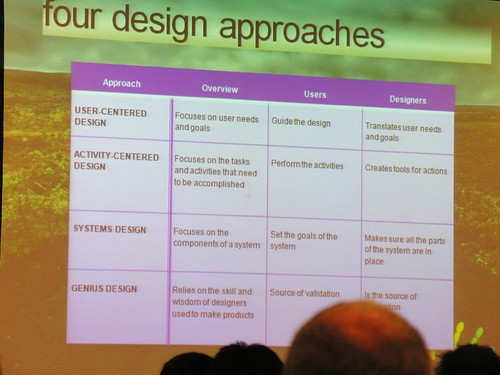 The many ‘approaches’ to tackling design problems. User-centered design is becoming popular, but may not be the most appropriate because users might not know what they ‘want’. Darryl uses the Google homepage as an example of activity-centered design, where the search is the activity and simple search box on the homepage. He adds most developers use the genius design approach, whereas developers define what is right for the users. 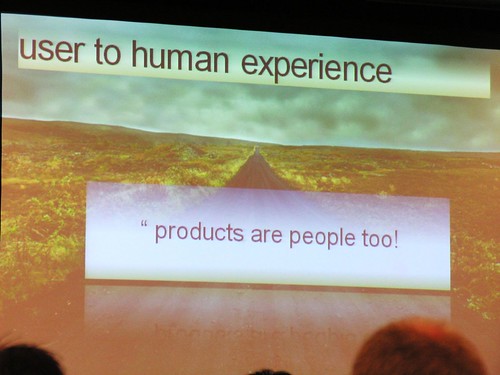 Darryl told a story about a scenario at a Microsoft research activity in Redmond. The test involved two groups of users both using a poor quality PC for a week. At the end of the week, one group was asked to answer a survey about their experience on the same crap computer they’ve been using, and the other group answering the survey on another and presumably better computer.

They found the results were at two opposite ends of the scale, where the group who used the same computer for the week and survey were more forgiving about the experience and other group more critical. From the later interview they found out the forgiving group had ‘feelings’ for the computer and didn’t want to “hurt it’s feelings”. 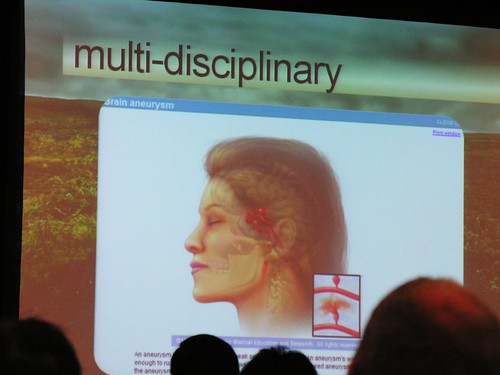 Sometimes, designers have to be knowledgeable in many many disciplines. For example in the above technical drawing explaining a medical condition, the designer would not only have skills in drawing human figures, but knew of both the human skeletal system and the nerve system. 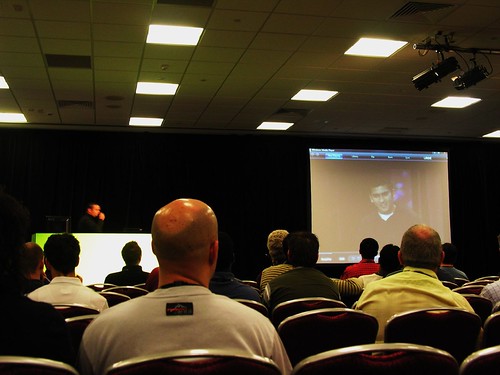 Then we watched the TEDTalk video about BumpTop. Looks like Darryl is a TED fan too. A specific feature he pointed out from the BumpTop video was the use of circular or pie menus. This is a user-interface concept Microsoft has patented over and over again, so I’m not surprised if they were to go ahead with the radical idea. The biggest benefit between a pie menu and a traditional drop-down menu is the ability to select any of the available options with the same amount of ease. Darryl called this “ergonomic value of design”, where the interface actually reduces RSI. 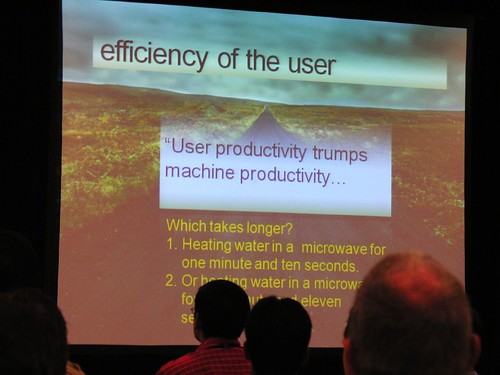 Moore’s Law states computing power doubles every 12 months, but we haven’t been able to touch any faster. User interfaces haven’t changed to increase user efficiency as much as computer efficiency. The question Darryl asked was, 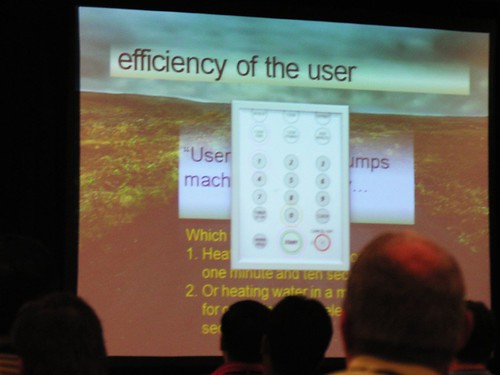 Of course, this was a trick question. The answer was “one minute and eleven”. This is because of the way microwaves have been designed with the number pad buttons. From research, they found pressing 1-1-0-OK takes three seconds longer than pressing 1-1-1-OK. 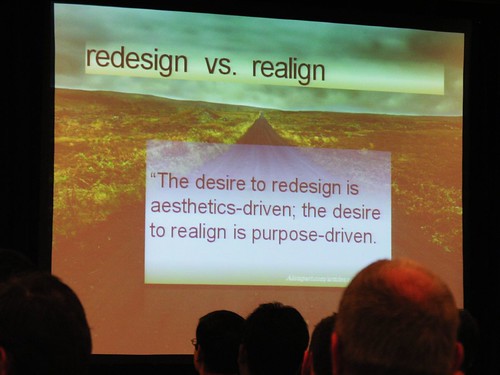 Redesign gone wrong can costs business millions of lost revenue through user dissatisfaction. Better to realign, strategy and priority. This is what we should expect more of from Microsoft in the future. Instead of “big bang” redesigns, we should see smaller tests in the market with new ideas. 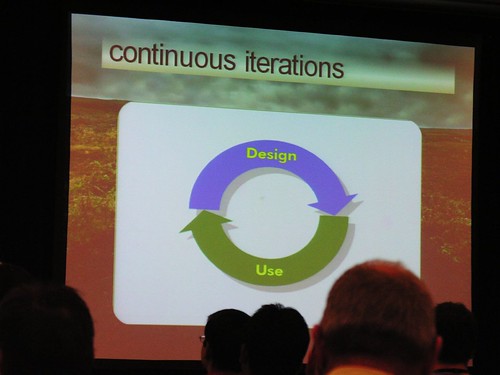 Continuous improvements than one big change. 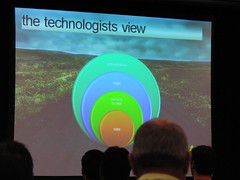 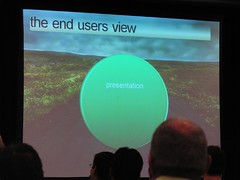 Technologists sees many layers within systems and applications, whereas end users usually just see one. 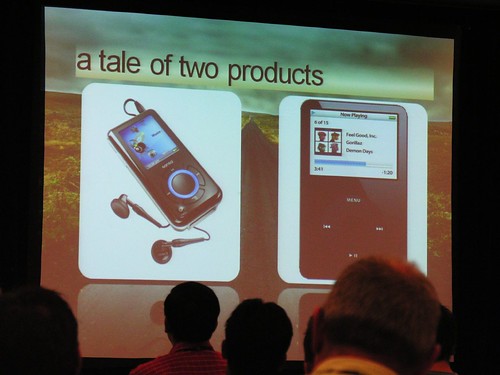 “Think systems, not products.” The story about how the iPod owned the Sansa. 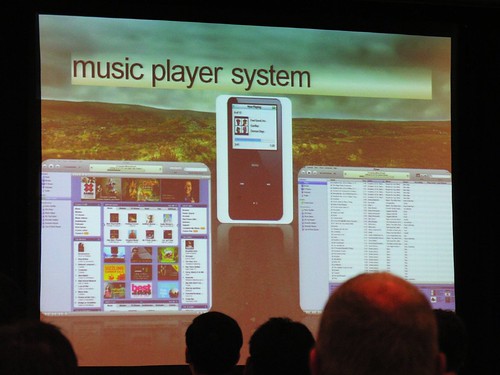 The Sansa was technologically superior, it had better sound quality, better connectivity, more memory and costed less. However, less people own a Sansa. Because music acquisition is a very hard thing, Apple got it right. Apple built an entire system, putting the right technology in the right place. 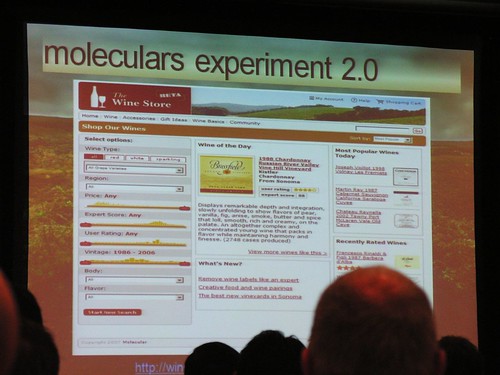 The Molecular Experiment did a case study with a fake wine store for usability studies. Some interesting they found including users ‘want’ to see a loading screen. Waiting for a few seconds, users feel like they are in control – “this interface changed because I did something”.

For some reason, users also expected the back button in the browser to actually undo form actions on the website. To work around the problem, Darryl claims Molecular actually built a framework which overrides the browser’s back button to do custom functions. They will also be building in similar functionality in Silverlight. 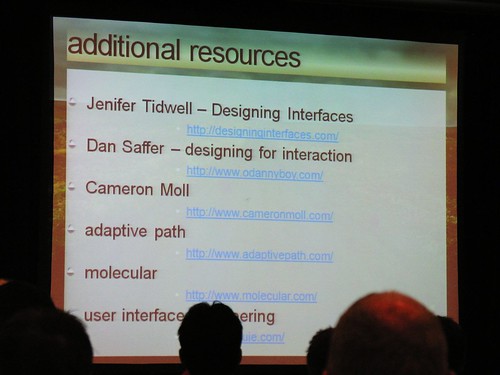 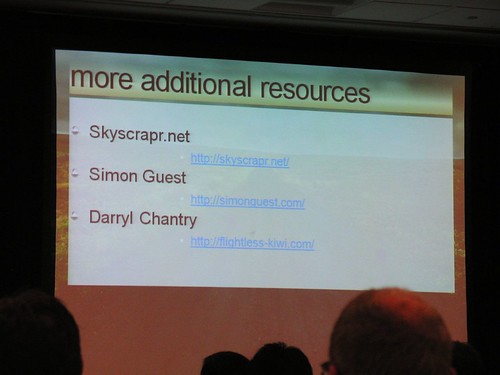