I am now the proud owner of a new iRiver Clix digital media player. I won it from a competition hosted by the cool Sean Alexander, group product manager responsible for all things media at Microsoft. He sent me a 2gb iriver Clix as well as a cool Windows Media Player 11 & Clix branded jacket, sized in extra large of course, I’ll grow into it. 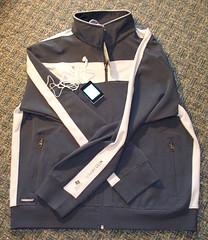 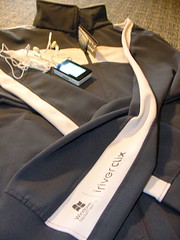 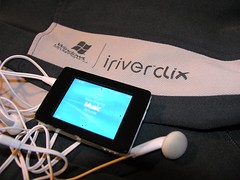 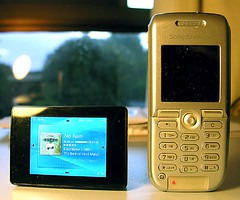 I was surprised just how freakishly small this device is. By looking at all those marketing material and reviews photos, the device seem as big as something like the iPod Nano, but infact, it’s small than a credit card. Not that there’s anything wrong being small, but when such a device supports video and pictures, you expect a little more screen real-estate. Having said that, the 320×240 screen resolution is absolutely gorgeous. In an area of just 2.2inches, the high resolution means you don’t see any individual pixels or pixel gaps.

Apart from its size, this little device packs-a-punch. The interface is a real eye-candy. It’s definitely Vista/Aero-inspired, clean, polished and intuitive. Even when my dad first picked it up, he could navigate around with no instructions. Attention to detail in the interface like the wallpaper colour changing according to days of the week, the small clock on the top left corner, and the ‘next song’ scroll ticker really stands out on this device. Also attention to detail in terms of hardware like the locking of the navigation buttons when you lock the device adds a lot to the experience.

I’m no audiophile, so I can’t comment much about the music quality, but it sounds good enough to me. The colour of the supplied headphones are a little upsetting. iRiver marketers, if you have this really cool device that stands out from the crowd, don’t make your earphones look like an iPod. Apart from that, SRS WOW is integrated as an equalizer and has a significant effect on the bass and clarity, even if it is not so effective in Windows Media Player.

Added on 1 August: The video playback functionality is rated at 15fps, which lacks compared to other full-motion playback devices with 24fps. However even if it is nearly half the frames, the video is still watchable, although maybe not the best experience. This applies to the FlashLite games as well. Even if this device has a faster CPU compared to its predecessor, the games illustrate the lack of processing power in these devices. The rendering is choppy and navigation is unresponsible, games can be considered a bonus, not a feature. There may be a possibility of a firmware upgrade in the future which could fix these problems.

Probably the only bad thing about the Clix is the storage capacity. The Clix comes in variants of 1GB and 2GB models, with potentially higher capacity models coming in the long-term (not next week). In comparison to the hard-drive based iPods, this is definitely an issue if you want to store your entire music library on it. Personally I like to keep my music fresh, so I would only sync songs that I would want to listen to, therefore 2GB is adequate. But the limited capacity also restricts the ability to use it as a ‘USB drive’, to store other data such as documents and applications.

Like all good gadgets, the iriver Clix is not yet available in Australia. Possibly launching in September with an AU$299 retail price. It is now available from Dick Smiths Electronics for the price of $299. I’m glad to be riding the wave early.

I’m also glad Sean used DHL instead of the UPS who previously delivered a package to me three months past its use-by date, almost 6 months after it was originally mailed out.

Also, check out this awkward iRiver song (MP3, 0:50sec) that shipped with the device. I think the composer and lyrics-writer were on two different planets.